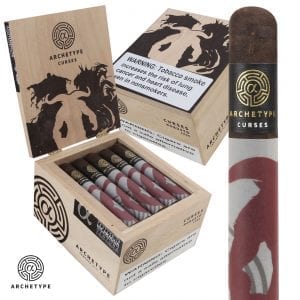 Description: The Archetype Curses is a 5 x 50 Robusto stick, it has a Connecticut Broadleaf wrapper, Nicaraguan Habano binder, and a Nicaraguan filler. Ventura Cigar Co. makes this cigar in their Tabacalera Oliva de Nicaragua factory, where it has been in regular production since 2018.

This cigar has a very interesting cold draw with a nice molasses flavor to it. The flavor of the cigar during the burn is different however, the predominate flavors I tend to get for the majority of the smoke are oak, chocolate, and toasted coconut. When first lit there is none of the harsh bite that plagues some cigars, but through the first quarter of the cigar there is a building of pepper in the smoke that mellows away before the halfway point.

This stick has good and consistent construction cigar to cigar. It has a nice open and even draw, that does not require relights. I have found that it occasionally needs some evening out but not too much. It has a nice soft construction feel without being loose or flimsy. 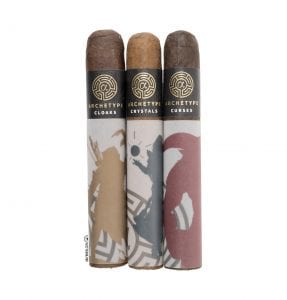 Comments: The Curses it part of the Archetype line from Ventura Cigar and the line has three different blends. In addition to Curses there is Cloak which is a box pressed cigar with a Connecticut Broadleaf wrapper, and Crystals which has Nicaraguan sun grown Habano wrapper. All three blends come in a Robusto (5 x 50) and have a Nicaraguan filler.

This cigar has tended to smoke for right around an hour and a half per stick. If you a multiple cigar per night kind of person and you tend toward medium to full bodied flavors as I do I would suggest this a great stick to start the night with. It’s mellow start and well rounded medium body make it an excellent jumping off point. If you like lighter cigars I would suggest moving this stick towards the back of your evening lineup to build to the flavor it has over time.