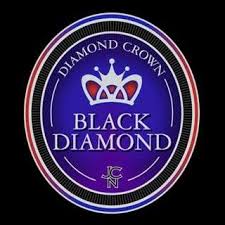 Description: The Black Diamond line sports three different cigars. This review is is specifically for the Black Diamond Emerald, which is a 6 x 52 Parejo. However, each of the three cigars is very similar in most respects and the other two sticks are the Black Diamond Radiant (4.5 x 54 Robusto) and the Black Diamond Marquis (5.25 x 56 Corona). The Black Diamond is aged 5 years and has a Connecticut Broadleaf Maduro wrapper, and a Dominican filler and binder. It evokes a broad flavor palette that includes definite notes of chocolate, leather, pepper, and cream.

Comments: The Black Diamond line is produced through the combined efforts of the Fuente family and JC Newman Cigars, although it is distributed under the Diamond Crown name. With these two power house names behind the stick it was no surprise to me that it was a very good smoke.

I had the opportunity to smoke one just recently at the Davidoff Lounge in Tampa just outside of Ybor City. Which I felt was fitting given the proximity to a large part of the JC Newman operation. This is one of those cigars that has a bit of a reputation and for that reason it has gathered both its avid fans and stalwart critics. I end up being closer to the side of the fan, yet without being enamored with every aspect of the stick. The Black diamond is the quality you would want or expect from a $20.50 cigar, but neither does it exceed expectations.

The thing about this cigar that stands out most to me is the superb way the various flavors blend together during the smoke. I find this cigar to have more peppery notes than many other reviewers. For me when it comes to cigars with notes of spice or pepper, a little is often nice but as soon as it starts to get strong, instead of blending with the other flavors, the spice or pepper starts to fight and clash with the other flavors. In the black diamond I detect a boldness to the spice and pepper flavors, that at the same time does not feel like it is in a fight for dominance, but rather part of a harmonious dace with the other flavors that are present.