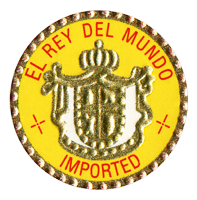 Description: The El Rey del Mundo Oscuro comes in five different sizes. This review is based around the Robuso Larga (Toro, 6 x 54), but it also comes in a Robusto (5 x 54), Rectangulare (Corona, 5.6 x 45), Robusto Suprema (Churchill, 7 x 54), and a Choix Supreme (Toro, 6.1 x 49). This cigar gets its name from its wrapper which is a Oscuro Sumatra. It also has a Honduran filler and binder after its country of origin. 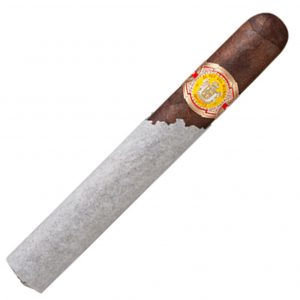 This Oscuro has a very light and subtle cold draw with clear notes of hey that do not come though in the rest of the smoke. While I found this to be a very enjoyable cigar it was much more on the mild side than seemed to be advertised. It has a primary flavor profile of very earthy notes, as you go through the smoke it also picks up cashew like notes of nuttiness. This cigar is light on the spice and what spice there is tends to be more of a sweet spice. The flavor of this cigar is very consistent stick to stick and holds the flavor all the way to the end much better than many mild end cigars tend to.

The El Rey del Mundo Oscuro come with an elegant individual packaging style, with a classic red, yellow, and gold collar that is wrapped over not only the cigar but also full white tissue paper wrap. This tissue paper wrap covers the full cigar like a skin and is twisted at both ends, making this a very distinctive cigar. The cigar also has a very good construction under the paper as well. This is one cigar I have never had a bad roll with and it gives a very even burn. The draw and resiliency are both good but not anything that one would typically feel stand out enough to take note of.

Comments: El Rey del Mundo, which means “King of the World” in spanish, is one of the oldest and best respected names in the cigar industry. Created in 1848 by Emilio Ohmstedt it now is rolled in two locations, Habana Cuba and Honduras. In the 1960s and 1970s the global taste for cigars took a turn for the full bodied. This meant that the El Rey del Mundo line, long known for its subtle and complex flavor profile waned in popularity. Despite beings someone who is given to these more full bodied flavors, one of the things I respect about this line most is that they did not compromise with the times but continued to be true to the excellent product they have made for generations.