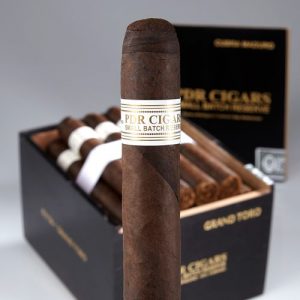 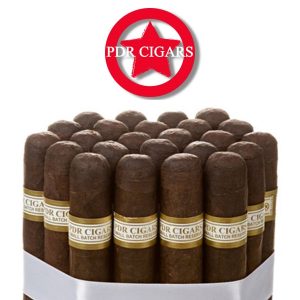 This cigar starts with a an odd cold draw that is a bit biting and acidic. I try not to hold a cold draw against a cigar, while it can be interesting and a nice bonus at times I personally tend to focus on the actual smoking part of a cigar. The Small Batch Reserve (Maduro) has an interesting flavor profile that while blending well, seems to present itself in layers. The first layer if a woodsy pine flavor. Layered on top of that is an orange zest flavor that gradually transforms into more of a lemon zest flavor over the life of the smoke. Finally, a top that are faint notes of butterscotch. This cigar walks the line between a refreshing smoke with just the right combo of tang and spice, and lacking a depth of flavor that can give way to bitterness for some smokers. I will say the flavor was very consistent from cigar to cigar and while I thought it flirted with being a miss at times I always enjoyed it. One last flavor note, this cigar has a flavor profile that is solidly consistent, however if you are someone that likes to smoke a stick down to an inch and a half or less this cigar will not hold up well.

The construction of the Small Batch Reserve (Maduro) is one part of the cigar that is not in question. All of the sticks I have smoked have been remarkably consistent. The draw is always the same and well within the correct range. I tend to like a draw that is a bit more open so for others this cigar may be near perfect on that score. As for the burn I have never had any problems, it seems to burn even and well, without need of relights. I have also never had any problems with splitting or unraveling with this stick. The one small flaw I have run into is that on several of the cigars the top cap layer seems to want to come loose. This does not seem to have much impact on the smoke however, since it is just the top layer and depending on the cut you use, you will be removing it anyways.

Comments: Pinar Del Rio has primarily been the work of Abraham Flores and Juan Rodriguez. They have seen the bulk of their success with the 1878 series, however the Small Batch Reserve series includes both the Maduro line that is reviewed here and the Habano line, which we will hope to review in the future. The Maduro line is still a Maduro Habano as opposed to a standard Habano so please do not let that confuse you.

The following is what Pinar Del Rio says about themselves on their website: “PDR Cigars, a boutique modern factory in Tamboril Dominican Republic. PDR hires only the most experienced rollers and it shows in the quality of every cigar. Each puro is delicately handcrafted that results in a cigar of supreme construction. The tabacco leaves used in every blend is of the highest quality and the refined finish is a testament to the attention given to every leaf that passes through the doors of the PDR Cigar factory. Our doors opened in 2004, now in its 15th year of independent operation, we are proud to present to you the jewels of La Fabrica.”