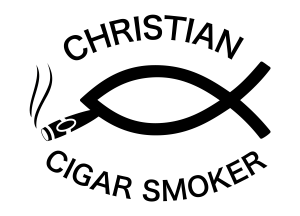 Every good organization needs a quality logo, and we are proud to debut ours today. Look for this logo to start to be seen more around the website. And in future, we hope to see this logo on some merch that will be available through the website. If that is something you are interested in, please be patient with us. We want to make sure to bring you a quality product at a good price when we are able.

Most of the logo is self-explanatory. However, if you are unfamiliar with the fish, it is called an ichthus and has been a longstanding symbol for Christ followers. If you feel putting a cigar in its mouth is disrespectful. Well, to be blunt, this is probably not the website for you!

Here is some info taken from Wikipedia giving some good detail on the Ichthus symbol:

The ichthys or ichthus, from the Greek ikhthýs (ἰχθύς 1st cent. AD Koine Greek [ikʰˈtʰys], “fish”) is a symbol consisting of two intersecting arcs, the ends of the right side extending beyond the meeting point so as to resemble the profile of a fish. The symbol was adopted by early Christians as a secret symbol. It is now known colloquially as the “sign of the fish” or the “Jesus fish“.

Origin: the first appearances of the ichthys symbol in Christian art and literature date to the 2nd century AD. The symbol’s use among Christians had become popular by the late 2nd century, and its use spread widely in the 3rd and 4th centuries. In the early Church, the Ichthys symbol held “the most sacred significance”, and Christians used it to recognize churches and other believers through this symbol because they were persecuted by the Roman Empire. The Ichthys symbol is also a reference to “the Holy Eucharist, with which the miracle of the multiplication of the loaves and fishes had such intimate connection both in point of time and significance.” While many Christians hang a cross necklace or rosary inside their vehicles, “the fish sticker on the car is a more conscious symbol of a witnessing Christian—significantly, unlike the former, it is on the outside of the car for everyone to see”.

We hope you like our new logo as much as we do!

This is Pastor Smokey praying you all are encouraged in pursuing the glory of God, before and after the smoke clears.